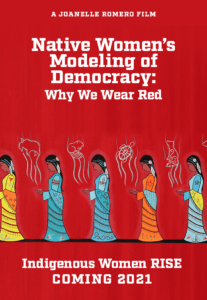 This is an important and timely conversation today examining democracy, fair governance, the 100-year anniversary of women gaining the right to vote in the United States, VP Joe Biden’s Violence Against Women’s Act, the representation of Native Women in film and television – lack of inclusion, and Why We Wear RED.