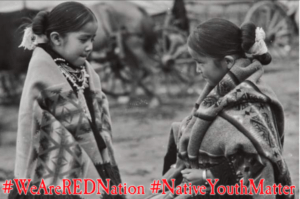 Native Youth Matter – If I Can See It I Can Be It is a native youth program of Red Nation Celebration Institute founded in 1995. Its a community of out-reach programs and initiatives that build strong and healthy relationships with Native Youth on Reservations and in Urban communities. Historical trama, youth suicides, sexual assault, missing & murdered youth in Native communities is higher than any other race. Red Nation Celebration Institute addresses these issues with Native youth in healing themselves through film, music, dance, sports and the arts, and international relations in Cultural Bridging. Its a prevention educational program designed to support Native youth in empowering them to tell their own stories.

Native Youth Matter – If I Can See It I Can Be It has screened over 300+ Native Youth Films over the last 14 years that have been directed, produced, written by native youth including the annual matinee screening of ABC/Hallmark “Dreamkeeper” the Myths & Legends of the American Indian. Native Youth Matter programs and initiatives has worked with Michael Jackson, to screening films, to Native Youth performing at Red Nation concerts, to workshops at UNITY, to film contests, to Red is Green Carpets events, to busing in Native and Non-Native youth to Red Nation events, to donating $10,000 worth of school supplies, books, toys, bikes, computers to Pine Ridge and Rose Bud Reservation, to over a 3000 Red Nation T-Shirts to Native programs.

Red Nation Celebration Institute established the Native Youth Matter If I Can See It I Can Be It program in 1995, the program supports and encourages excellence in filmmaking, ages 12 – 21. Past Student winners have gone on to receive RNCI Red Nation Award nominations. They include Montano Rain, E.C. Galesi, Stacy Howard, Robin Labeau, Camille Manybeads Tso, Colton Willier, Kolin Dayish, to name a few …